To share your memory on the wall of William Jajewski, sign in using one of the following options:

Print
William “Bill” Jajewski, age 89, of Stevens Point, WI. passed away after a 6 month battle from colon surgery, under the care of Heartland Hospice and Marshfield Hospital.

Bill was born in Stevens Point on May 16, 1931, to Martin and ... Read More
William “Bill” Jajewski, age 89, of Stevens Point, WI. passed away after a 6 month battle from colon surgery, under the care of Heartland Hospice and Marshfield Hospital.

Bill was born in Stevens Point on May 16, 1931, to Martin and Katherine (Rekas) Jajewski. He attended St. Bronislva Grade School and graduated from P.J. Jacobs High School. He enrolled in business classes at UWSP.

Bill entered the United States Army October 3, 1953 at Ft. Riley, Kansas. He served his country at SGT and earned the National Defense Service Medal and the Korean Service Medal. He was honorably discharged in September of 1955 from Wolters AFB in Mineral Wells, TX.

Bill belonged to the Elk’s Club #641 for 57 years. He was also a charter member of the Stevens Point Lion’s Club for 54 years. Bill was on the bowling committee for over 40 years, checking out bowling alleys that would be good for Lion’s bowling tournaments. Bill was District Governor for 27-CL Lion’s Club in 1990-1991, and he was also a member of the AMVETS and VFW.

Bill loved to go fishing in Boulder Junction and loved to eat his catch. But, he never cleaned a fish. He loved watching Jeopardy and Old Westerns. He had a great memory and was a big Vikings Football Fan and loved watching with his best friend Butch Lind. He also traveled to many countries.

Bill was preceded in death by his son, Mark and his daughter Marcia Jenks. His sisters, Gerry Rybicki and Ruth Touey as well as his parents, Martin and Katherine.

Bill was a very loving and honest person. We would like to thank Doctors Angela Rhode, and Dr. Terri Hahn from Acsension St Michael's Hospital and Dr. Soskos of Marshfield Hospital along all the staff of Heartland Hospice for the special care that was given.

Funeral Services for Bill will be held at 1:45 PM on Thursday May 6, 2021 at the Shuda Funeral Chapel - Stevens Point. Full Military Honors will follow. Friends and family may gather to share memories from 1PM until the time of services on Thursday at Shuda's.
Read Less

We encourage you to share your most beloved memories of William here, so that the family and other loved ones can always see it. You can upload cherished photographs, or share your favorite stories, and can even comment on those shared by others.

Posted May 05, 2021 at 03:08pm
Bill was a very nice man. He would to go to Al's diner for lunch and sit around and talk. Also helped him with furnace troubles. He will be missed

Posted May 05, 2021 at 12:41am
My dad and I were looking over some photos as we talked about and remembered Bill. Found a picture from his baptism in 1931! Bill was a part of my parent’s wedding party. Partial Jajewski family reunion in Markesan, Wi with Jim, Tom, Gerry, and Bill posing below the Jajewski Rd sign.
Jim and Susan Jajewski

Posted May 04, 2021 at 08:52pm
It was always a joy to spend time with Lion Bill. He was a special Lion, one who did wonderful things for the community and State Lions. We will miss him and extend our sympathy to family and friends.

Posted May 04, 2021 at 08:56am
Thank you for all your hard work and dedication to the Lions Eye Bank of WI. We were lucky to work alongside such an amazing & caring person. We are thinking of you Georgia, Butch, Steven’s Point Lion’s club, and all his family and friends.
Sincerely,
Kasey Schmitz and LEBW Family 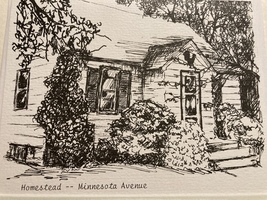 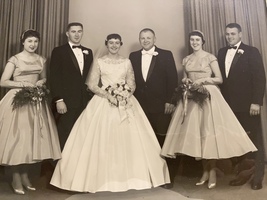 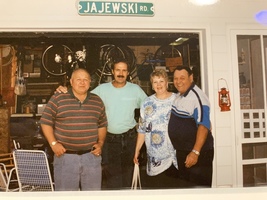